Home » Musings, etc » Either/Or 2…Seriously Guys, Who Would You Rather?

It’s getting a little out of hand, this Clooney-Gosling fiasco.  We are like a deadlocked jury, and there is no chance of a majority rule.  During a coffee break at the beginning of the work week, we are sitting around the table, poring over “People” magazines. We are once again, discussing the admirable qualities of these two men when a woman from another department, who had obviously over heard our endless deliberations, pipes up: “What about Bradley Cooper?”  We all glance at each other with sour expressions.  What about Bradley Cooper?  I’m sure in some other circles, Bradley Cooper is attractive, but to us, he wouldn’t even make it through the first round.  But it did bring up a valuable point…what about other men? Surely “Glooney” doesn’t encompass all we love in our celebrity men.  And from there, a magical week of hypotheticals began, filling the kitchen like musky cologne, intoxicating us amid our daily tasks, causing fits of fantasy and uncontrollable giggles.  It also lead to the rather nifty invention of “Jackman Beckham-Craig”, a hunky man-strosity which was almost as fantastic as Kathleen’s invention a few weeks back: Men made entirely out of brownie—and please, do hold the nuts.

With the help of the most recent “People’s Sexiest Man Alive” edition, we created a rather lengthy list of prospects.  We spent our breaks developing a small chart with such significant mathematical possibilities that the janitor from “Good Will Hunting” would scratch his head in confusion.  A round robin of sorts, meant to lead us to a sexual resolution pitted the likes of against: Ben Affleck vs. Matt Damon/ Ryan Reynolds vs. Channing Tatum/ Leonardo DiCaprio vs. Matthew McConaughey/ Gerald Butler vs. Hugh Jackman/ (and of course) Ryan vs. George.   I know what you are thinking…how is a girl to choose?   Looking at the list over lunch, Jessica –our resident Filipino and official young person—points out a gleaming error on this list.  “Where are all the minorities? We need some colour on this list”.  I flip through the weathered magazine dutifully, “Ok… lets us find some ‘bruthas’ for this round robin”.  Jessica looks at me as if I just mentioned Bradley Cooper.  “Don’t say ‘brothers’ like that…you can’t pull it off”.  She says the same thing when I try to inspire the team by suggesting that we get this ‘par-tay’ started.  “It’s not a party…it’s just not”, she shakes her head sadly.  “That’s why they call it work”.

The group does briefly toy with the notion of allowing this list—an already daunting one—to include actors of all eras: “Are you suggesting a Sexiest Man Alive—living or dead edition?” you ask me.  “Yes”, I would answer…”For but a moment…it was discussed”.  But then we decided against it for fear it would come down to Robert Redford and Paul Newman circa “Butch Cassidy and the Sundance Kid” and then nobody would get out of this work week alive.  So we focus on the present, trying to add more dimensions of colour to our hunk rainbow.  “What about Shemar Moore?” Kathleen pipes up.  “Who?” Jessica and I respond in near-unison. “You know! That guy on Criminal Minds?  He used to be on “Young and the Restless”?” her voice trails off at the sight of our blank faces.  “Never mind, just Google him tonight, and he’ll find his way on the list”.  Poor Kathleen often has to tell us to Google things we are generationally distanced from.  Jessica especially— she only recently revealed that she while sometimes laughs with us, she does not always understand the reference.  When Kathleen regales us with a tale of seeing, and nearly swooning at the sight of Richard Grieco on the streets Vancouver during his “21 Jump Street” heyday, we cackle heartily until Jessica’s laugh fades and smile droops.  “Sorry…who’s Richard Grieco?”

Kathleen may never live that celebrity crush down…nor will she for occasionally dropping the term ‘bod’ in a sentence.  “Are you seriously saying ‘he’s got the nicest bod’? That’s like me saying ‘par-tay’.  That’s like my mother still using the term ‘jiggy’, it gets to the point that you can’t even use the word ironically anymore.  It gets to a point that unless you are Mick Jagger and Keith Richards, you have to grow out of being cool. “We’re not kids anymore Kath—we can’t sling the lingo around like we used to”. Speaking of embarrassing moments, there was an unfortunate addition to the People spread, a take on the whole “Magic Mike” phenomenon.  Basically anyone remotely famous, who was named Mike or Michael, had a stripper style pictorial.  Oh dear, Michael Bolton needs not expose his chest hair like that, and why, on God’s green earth is Michael Buble in a cowboy get up?  Still, embarrassing chaps and lassos aside, Buble is considered for the list.  “Would you –Du-ble?” I ask the girls.  (Holy Moses, aren’t my puns clever?)  The answer, (and it had nothing to do with my awesome pun), that no…we would not ‘du-ble’.  Listen—no one has a bigger soft spot for the man than me…I would go to a concert in a heartbeat, sing along to every song and sob hysterically about sixteen times, but I would not get jiggy with Mr Buble…not all whored up like a dime store cowboy…no thank you.

Eventually, we narrowed the list down—Ben Affleck defeated Matt Damon, Hugh Jackman destroyed Gerald Butler and Mario Lopez was eliminated in favour of the Old Spice Guy…ahem, “People” magazine didn’t have a terribly colourful rainbow either.  From there we pitted all the winners together, (we threw in Shemar Moore in at the last minute because, though everyone forgot to include him, Kathleen refused to let him go) and narrowed it down to three: Jackman, Clooney, and Gosling.  To resolve the matter once and for all, I scrunch up the little pieces of paper, mix them up and hand them out around the table.  Jessica got Ryan, Kathleen got Hugh, and I got George.  There, issue resolved.  All was right with the world.  Jessica, who had wanted Gosling all along, now has her head resting on her hand, her face forlorn. She sighs, “Now I kind of wish I had gotten Hugh Jackman”.  The fact is, any one of the men would have been wonderful, but the conversations had begun to feel as though these were real possibilities.    And that by blogging about it, made those possibilities all the more real.  But all we had left were tiny bits of paper with names written in pencil. But this is a technological age, there are always nerdy teens who post ‘half-joking’ bits on You-Tube, asking famous women to be their prom date, and these women go!  Why, just today on the CBC 2 morning show, the announcer said that model Kate Upton agreed to take a dateless boy to his upcoming dance. “It proves that sometimes all you have to do is ask”, the announcer concluded.  So who knows? Maybe Hugh Jackman trolls the internet looking for women in gumboots and hair nets who smell of garlic and tomato paste?  Maybe Ryan Gosling has an upcoming film role as a prolific salsa maker and wants us to show him how it’s done…and we could all take turns standing behind him at the giant Hobart food processor, guiding his hands a la Patrick Swayze and Demi Moore in “Ghost”.  And maybe…just maybe, someone in Clooney’s entourage would show this to him jokingly, and without a hint of humour,  he’d stand up and insist that someone fire up his chopper “This is no laughing matter…these women need to see my Italian villa”.  And we would go with him, and we would not disappoint…gumboots and all. 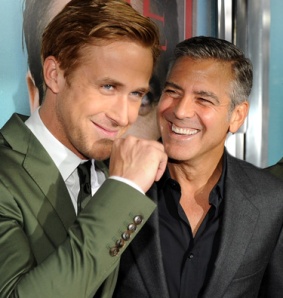 7 thoughts on “Either/Or 2…Seriously Guys, Who Would You Rather?”