I have a medical procedure later today and because of that my husband and I have an unprecedented day off together.  Ben, in his excitement to sleep in, forgot to turn off the alarm clock, which went off at 545 am.  And just like that, we were wide awake and could not drift back into a peaceful slumber.  So why get up and go out for breakfast? As we walk through the door, Ben noted that the restaurant has WiFi, and that he’d show me how to access it on my new mobile.  I am slowly learning how to use my phone–I have been so reluctant to get with the wave of cell phone culture, where some people can do everything but make a stir-fry with their tablets–(Oh, Apple is already working on that? Okay, so there’s that to look forward to).  Ben is always encouraging my writers platform, saying the phone would allow me to Tweet anywhere–instead of “sitting in front of the laptop…again”.  Though, I feel reluctant to share everything–isn’t it enough that I tell you all about my marriage, my choice of contraceptives, my darkest fears and deepest hopes…do you need to know that exact moment I eat a sandwich?  (Oh you do want to hear that? Duly noted.)  But, as we waited for our eggs, Ben showed me features on my phone that I didn’t even know I had.  And he explained how to tap into the WiFi.  I didn’t really have any pressing internet business so it was all a bit anti-climactic, but it was good to know nonetheless.

The music playing in the restaurant was heavy, upbeat dance music.  Ben says: “This is not morning music, this is ‘I haven’t gone to bed yet’ music”.  Suddenly, the music switched to John Travolta and Olivia Newton-John singing.  Don’t worry, it was from “Grease”, not from their latest (ahem) album.  The song that followed was Captain and Tennille‘s “Love Will Keep Us Together”.  Ah, delicious musical cheese.

But this reminds me of a Joy Division fun fact (is that an oxymoron?)–I try to explain it to Ben–that someone in the band–Ian? Curtis? Heard this song–is it circa late 70’s or early 80’s? And then wrote “Love Will Tear Us Apart” in response.  Take THAT Captain & Tennille!  Everyone in Joy Division was impressed with the song, not noticing the dark lyrics, and possible cry for help.  He then committed suicide– shot himself? hung himself? While the Captain is probably out there somewhere, tickling the ivories and still wearing that stupid hat, singing the song that drove Joy Division apart.  There are so many factual holes in my fun fact, it was like telling a joke improperly, ‘oh wait–it’s important to know that the elephant was on a bicycle’.  Then I remember–I’m a modern woman, and I’ve just figured out how to access wi-fi on my phone.  And so, I Google Joy Division and get all the facts–he hung himself at the age of 23, in 1980, the night before his band was to go on it’s first North American tour.  You kind of have to feel bad for the band–bags packed and stars reached and then Ian Curtis has a tangle with the washing line, leaving his wife to find him, and causing his band to reconfigure the group into the aptly titled; “New Order”. 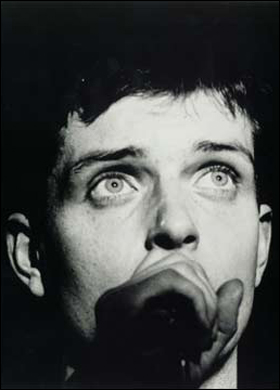 Ah-technology, as Nora Ephron said “Google replaces memory”…or something to that effect.  I like to think that it builds your memory, remember that time we went out to breakfast, and I learned to use the internet and immediately looked up a dead musician?”  If I had more time before the benzos kick in, I’d do more research, but now I can do it on my phone that I just look it up right after I tweet about the delicious sandwich I just had.  But first–lets have one more picture of the Captain and his overall wearing lady.