Anti-bullying is a real hot button issue these days.  There’s a Pink Shirt Day, legal options for bullied individuals, and Lady Gaga is on the scene acting as freaky fairy god mother to the unloved and uncool, and there is a growing movement to accept not exempt.

These empowering elements were not part of the zeitgeist while I was growing up. Social media had not yet existed and I will be forever grateful for that.  People can be especially cruel behind a keyboard and screen. Back in my day, if someone was going to bully you off-hours, they’d have to get out the phone book to crank call your house.  I once received a call in elementary school from a girl who called me a “fucking bitch” before hanging up.  I was on the only extension in the house, a black rotary phone in the living room.  Knowing that my mother’s eyes were on me, I say cheerily to the dial tone: “Okay, then, see you at school tomorrow!” before hanging up and pretending I wasn’t bothered.  In truth, my guts were in knots about that kind of thing for many, many years.

Suffice it to say, I was not a wildly popular kid in elementary/junior high school.  Was it that I was not contemporary? I watched an awful lot of old movies and “Little House on the Prairie” and felt as though I belonged in a different era altogether.  My older brother was extremely cool, was a beloved athlete with an endless string of gorgeous girlfriends, and the only scrap of credibility I had was in being “Anthony’s little sister”.  One night, I was playing alone in the yard, using a baseball bat as A) my gentleman caller, who swept me up into a delicious moonlight waltz and B) a cane, as I switched gears and became an embittered old woman telling myself that my waltzing partner would no longer come to call because, naturally, he had been killed in the war.  My brother had been watching this from the steps.  “Alicia, what’s going to happen when your school mates walk past, big boom box on their shoulders, and sees you slow dancing with a baseball bat?”  He had a point. The odds were, these girls were not going to be driving circles in the trailer park, but it was this kind of behavior that was social suicide-esque.  Still, I enjoyed my fantasy world, I needed that world were I was beautiful, adored, grown up and so very popular.

It was stuff like this that bled into my school life, being unbelievably uptight and old school that it made me worthy of an occasional beat-down.  Or, every girl getting a birthday party invitation on their desk but me—“That’s cool guys, I’m going to watch “An Affair to Remember” with my mom this weekend…so I’m booked solid anyway…”  Of course one likes to be included amongst their peers, but if you don’t reside in a similar context—you don’t have a hope in hell anyhow.  Once I attended a small party that apparently stray dogs could have been invited to.  Being in the same room isn’t the same as being accepted.  I vividly recall sitting on a folding chair, a bowl of Bugles on my lap, and everyone else slow dancing and singing along to Mr Big’s “Be With You”.  What is this song? How does everyone know this song but me?  This kind of thing would happen all the time throughout my early school years, totally locked out of the pop culture loop.

Though the threat of violence didn’t exist in elementary school, the worst of it was a bunch of girls deciding that if ever I came near, that they would scream at the top of their lungs and run away from me.  This was as good as an ass-kicking, like a swift kick to the heart. Once in junior high, I found a little niche, had a best friend, I found some old Sassy magazines, and just tried to survive the daily grind.  My father was a custodian at the school, so I told myself that the reason I didn’t have a boyfriend was because of my burly Welsh parent looming the halls after class.  In truth, his presence was a protective force.  On more than one occasion, he appeared when I was backed into a corner, like Frankenstein’s monster surrounded by villagers wielding pitchforks.

At the end of the sixth grade, I developed what my mother called “breast buds”, and she purchased a lacy little training bra from Sears.  She called it my “training for training bra”, I thought it was quite exciting, my first venture into womanhood.  In the change room after gym class (is there a more traumatizing room in adolescence?); someone spotted the bit of lace over my budding chest.  I made the horrifying mistake of calling it my ‘training for training bra’, which then created a spell of titters from other girls.  On the walk home alone, I hear hurried steps behind me.  I glance over my shoulder, and spot this sweet looking blonde girl. “Hi! How are you?” she smiles.  “Uh, me? Um, good”.  She asks me a follow up question I can’t quite recall, but she got me jabbering like a little monkey. She then fell behind by a fraction, reaches for the back of my shirt, wrenching at the material to snap the strap of my lacy training bra.  At this exact moment, my father rides by on his bicycle.  At the sight of him, I burst into tears.  The girl runs back to her friends and I walked the rest of the way home, my father riding slowly alongside me.

In junior high, there were some extremely scrappy girls that had a taste for my blood.  Once again, while walking home, another girl caught up to me, and got in my face about having a crush on one of her friends (which was completely unacceptable).  She grabbed at me and pulled me in a headlock.  Bent over, my head wedged under her armpit, I had a bit of time to think.  I’ve never been in a fight in my life, and if I were to pull out of this hold, I would surely get a punch in the nose, which would then drive the cartilage into my brain, which would kill me instantly…and I can’t bear the thought of that.  Frick, I just want to go home and make a grilled cheese sandwich and watch a bit of “Oprah”, dying from a broken nose was not on my agenda.  “Hey, what’s going on here?”  I hear my father’s thick Welsh accent, and I feel equal measures of gratitude and humiliation.  The crowd disperses as he approaches on his bicycle.  Once home, dipping my sandwich into ketchup and happily distracted by Oprah’s weight loss journey, I was so relieved to be safe at home, and I had my father to thank for that.

Later in the same year another girl, older, bigger and far tougher, decided that she also wanted to ‘take it outside’.  The most unfortunate thing is if you are going to get beat up, it takes the attacker to decide when it happens…you don’t get to pull out your own agenda and say “You know… the 12th isn’t a good day for me to get murdered…how about never?  Never works for me”.  A rather large crowd had gathered to watch this fight, and I was hiding in the library.  My father made me sit there, and was arranging for a neighbour to come and escort me home.  A few kids come into the library, “Just come out, just face it, you’re being a chicken”. You bet I’m a chicken, and I don’t want to get plucked.  I say “You know I’d be out there in a second… (even though I’m totally wearing a dress with white tights and Mary-Jane shoes and will lose so very badly if this girl gets a hold of me)…but my dad, he just won’t let me”.  My father comes in, looking serious, concerned.  “Okay, this is what I’m thinking, if this girl wants to have a go at you, you might as well get it out of the way…you can duke it out in the gym, so at least no one can watch”.  The blood drains from my body…“but then there will be no witnesses to my untimely death”.  Also, women are (for obvious reasons) not like men: a man will punch you in the face and then buy you a beer, a woman will scratch your eyes out, wrench out large portions of your hair, and then destroy you on a psychological level. 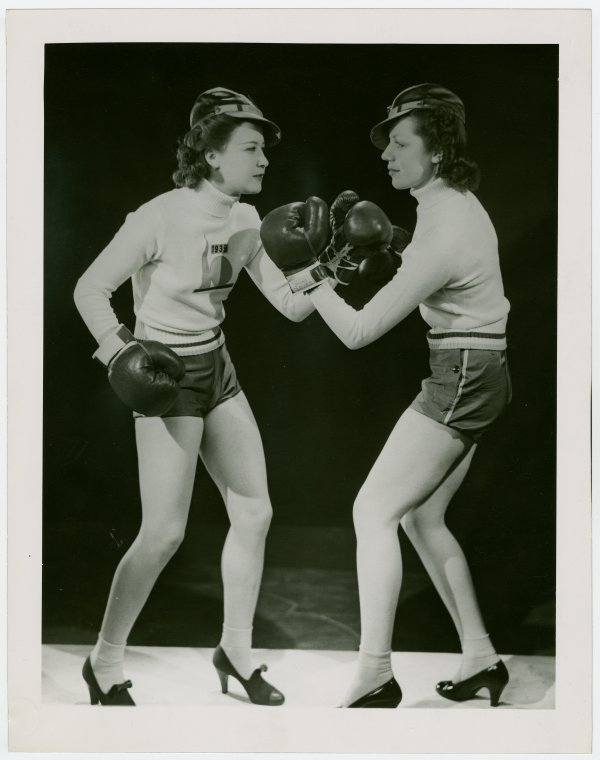 My escort arrives, a cool senior with a hockey player boyfriend, who wore thrift store t-shirts, baggy jeans and bowling shoes.  We leave out the back door to climb the hill to our houses, and see the enormous crowd that had gathered.  I instantly start to tremble, and am finding it difficult to steady myself.  As we walk, I keep my head down, though I anticipate the rush of fists flying at my face. For some miraculous reason, my would-be attacker was not amongst the mob.  She had to go home, and was not allowed to leave the house.  Her place of residence was alongside the schoolyard perimeter, overlooking the masses.  People were saying that I should go over there to fight—(are you fucking kidding me?) She hollers threats from her window in the low income housing unit, and I retaliate with the only weapon I have: my sense of humour. I crack up the spectators with a little underdog shtick before sprinting home and hiding under the covers.  Nothing ever came of it, and I am pleased to say I graduated high school without ever getting cartilage driven into my brain via a punch to the nose—hurray for me!  Though the honour belongs to my father— my fearless protector.  Thanks for always being on hand to spare me the trauma of failing, of losing, of being beaten so badly in front of a cheering crowd.

7 thoughts on “Bully for You”